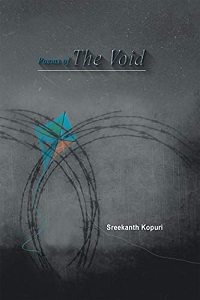 The Void narrates the lost way, reflected in the enigma of life’s new dynamics beyond the known with silence as its speech and absence as feeling. The landscape of the poems is both here and elsewhere – sometimes Machilipatnam, sometimes Oxford, sometimes Auschwitz or Colesieum. What Tomas Transtromer meant by “broken connection of things” tries to become the defining metaphors of the pervading void that encompasses the entanglement of the Marxist proclaimations, existentialist reforms and a legion of vociferous “isms” which live on the debris of the crucifixion. The book is a series of surrealistic musings that attempt to anthologise the voided and the avoided encounters and tries a re-constructive harmony from the congested space of the terminal earth. An invisibility allures our perceptions that reflect in scores of absences, juxtaposed realities and perpetual silence pervading in our both mundane and transcendental pursuits. Death stills our learning and life goes on like the ant-line on a tomb. The enigmatic gravity of the Crucifixion is invisible through the blurry picture of postmodernism. This universal deprivation is what Tomas Transtromer says “Deep in the forest there’s an unexpected clearing that can be reached only by someone who has lost his way.” 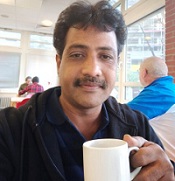 Sreekanth Kopuri, PhD from Venkateswara University, is a professor of English at Vasavi College, Machilipatnam, Andhra Pradesh, India. Sreekanth Kopuri writes poetry chiefly in English. The subject Sreekanth explores varies widely. He has read poetry and presented research papers at many universities including University of Oxford (UK), John Hopkins University (US), Heinrich Heine (Germany). His poems have been widely published including Heartland Review, A New Ulster, Wend Poetry, Word Fountain, Synaeresis, Vayavya, Impspired Ann Arbor Review and others. He has won accolades and prizes for his poems from many journals and publications. 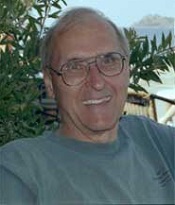 Paul Kiparsky Awarded for His Outstanding Contribution in Linguistic